The Woodstock 50 train wreck barreled through yet another weekend without being canceled . . . and there still aren’t any signs that it’s actually coming together.

Late last week, the festival finally found a new home at the Merriweather Post Pavilion in Columbia, Maryland . . . just THREE WEEKS before it’s scheduled to happen, which is the weekend of August 16th.

It’s been four months since the lineup was announced, and most of the acts have been in limbo ever since.  Now, the dust is finally starting to settle.

Jay-Z, John Fogerty, and Dead & Company all backed out this weekend.  And in response, Woodstock 50 announced that they were releasing all the other acts from their contracts, due to the venue change and all the other chaos.

The artists are still invited, but they’re not legally obligated to show up.

For now, The Zombies are the only act publicly saying they’re in.  (???)

Tickets STILL haven’t gone on sale . . . but sources tell TMZ they’re making it a FREE event.  And instructions on how to get tickets will be posted this week.

If that’s the case, it’ll be billed as a BENEFIT concert, and those who are able to snag seats are encouraged to donate to their favorite causes.

Supposedly, VIP tickets WILL still be sold at a cost in an effort to bridge the gap between expenses and profit . . . so that the event staff, security, and other costs can be taken care of.

In addition to all this, Merriweather Post Pavilion had a previously scheduled SMASHING PUMPKINS gig booked for Saturday of the Woodstock 50 weekend.

So it’s unclear if Smashing Pumpkins would want to transition their show into Woodstock, or if it’ll be canceled.  OR, if Woodstock will be reduced from a three-day weekend to a single day show.

That probably also depends on how many bands they can get onboard. 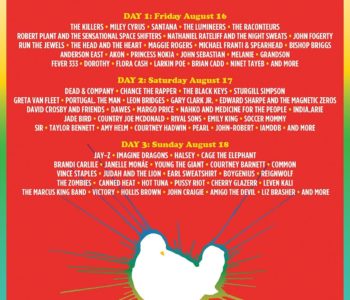 The Woodstock 50 Lineup Has Been Announced
ADVERTISEMENT