The Woodstock 50 Lineup Has Been Announced

Woodstock is celebrating its 50th anniversary with a new event in Watkins Glen, New York over the weekend of August 16th, and the lineup was just announced.

As we’d heard, the headliners include:  Jay-Z, Dead & Company, The Killers, Imagine Dragons, Chance the Rapper, Miley Cyrus, Halsey, The Black Keys, and Santana, along with The Raconteurs, The Lumineers, and Greta Van Fleet.

Dead & Company and Santana were part of the original 1969 festival, and some other returning legacy acts include:  John Fogerty, John Sebastian, Country Joe McDonald, Canned Heat, and Hot Tuna.

John Fogerty says, quote, “The mood in the country is different, similar in many respects, but different.  I’m very glad that I’m able to be here 50 years later . . . I’m going to be playing most of the same songs that I played then.”

Robert Plant is on the bill, performing with The Sensational Space Shifters.  Robert’s other band . . . Led Zeppelin, you might have heard of them . . . was invited to perform at the original show, but they turned it down. 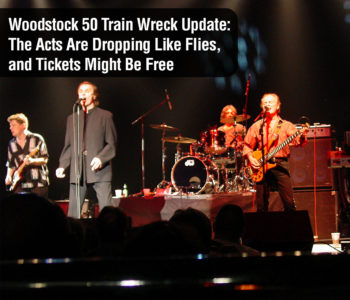