A Woman Looks Up How Much Her Secret Santa Spent . . . and Demands More Gifts

If your office is doing a secret Santa gift exchange, there’s probably a spending limit, like $25 or whatever.  Here’s an EXTREME case of what could happen if you spend less than that on the wrong person.

Someone just posted screenshots on Reddit of a text conversation between them and a coworker.  And now it’s going viral.

Basically, the guy spent $30 on chocolates and a blanket for his secret Santa gift.  The spending limit was $50.  And the woman who got the chocolates and blanket looked up how much they cost . . . and asked him to make up the difference.

He actually agreed to do it . . . so she asked him to buy her a $120 Samsung Galaxy tablet.  When he pointed out that was a LOT more than $20, she told him, quote, “My kids have been spending me up the wazoo.”

And then, when he started ignoring her messages, she said he makes more money than her . . . he doesn’t have kids to spend money on . . . he was rude to ignore her . . . and she doesn’t, quote, “know how you live with yourself, disgusting.” 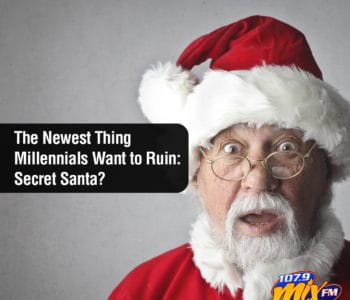